10 months agoAnne SewellAdd comment
Madrid is Spain’s capital and a city of elegant boulevards, museums featuring European art and beautiful parks, such as Buen Retiro. Meanwhile, visitors can see the baroque Royal Palace and Armory, while having an amazing shopping experience. However, Madrid also features many unique attractions for curious travelers to explore. Here are five.

The center of Spain’s capital, Madrid, boasts what is likely the only public monument to the Devil in Europe. The Fallen Angel (Ángel Caído) sits atop a marble pillar in the city’s Parque del Buen Retiro. Standing rather appropriately at 666 meters (2,185 feet) above sea level, the statue stands in a fountain decorated with demonic entities and reptiles. The sculpture itself depicts the moment that Lucifer is cast out of Heaven.

Sculpted in bronze by Ricardo Bellver, the statue marked the third World’s Fair in Paris. After the piece was acquired by the Museo del Prado, The museum later donated the sculpture to the city of Madrid in 1885.

The Fountain of the Fallen Angel is within easy walking distance of Madrid’s major museums. The easiest way to access this part of the city is via the Atocha metro station.

While most museums are a visual experience, the Museum for the Blind (Museo Tiflológico de la ONCE) is something different. This fascinating exhibit allows blind people to explore famous pieces of art and architecture with their hands.

The museum was inaugurated in 1992 by ONCE, the National Organization of the Spanish Blind. In fact, the Typhlological Museum is on the third floor of the ONCE building.

Among the exhibits on display are some of the most important pieces of art and monuments in the world, such as Rome’s Colosseum and the Venus of Willendorf figurine. Each model is created with raised details and vivid saturated tones.

Meanwhile, the museum also exhibits devices used to aid the blind throughout history. The Museum for the Blind can be found on the third floor of Calle la Coruña, 18, and the nearest metro stop is Estrecho.

A more whimsical version of a fallen angel landed face-first on the roof of a five-story building in Madrid. While it appears to be Lucifer, this statue does take the falling part quite literally. However, according to sculptor Miguel Ángel Ruiz Beato’s “Aerial Accident” doesn’t actually represent the Devil.

The meaning behind his statue is that a winged man went for a long walk. He then flew home with his back to the ground, sunbathing on the way. However, in the time he had been away, the city has erected a building on the meadow where he usually landed. The result was an undignified crash onto the roof.

The building stands at Calle Milaneses, 3, in front of the Market of San Miguel and the nearest metro station is Sol.

Right in the heart of the bustling city of Madrid is an ancient Egyptian temple, known as the Templo de Debod. Egypt gifted the temple to Spain in 1968 as thanks for the country’s help in saving historic sites that would have been flooded when the Aswan High Dam was complete.

Meanwhile, the temple stood in the Nile Valley since the 4th century BCE and was dedicated to the Egyptian gods Amun and Isis. Nowadays, the temple is set in a pleasant park, Parque de la Montaña and is surrounded by a pool that reflects its image. The temple is located a short walk from the Plaza de España metro stop. 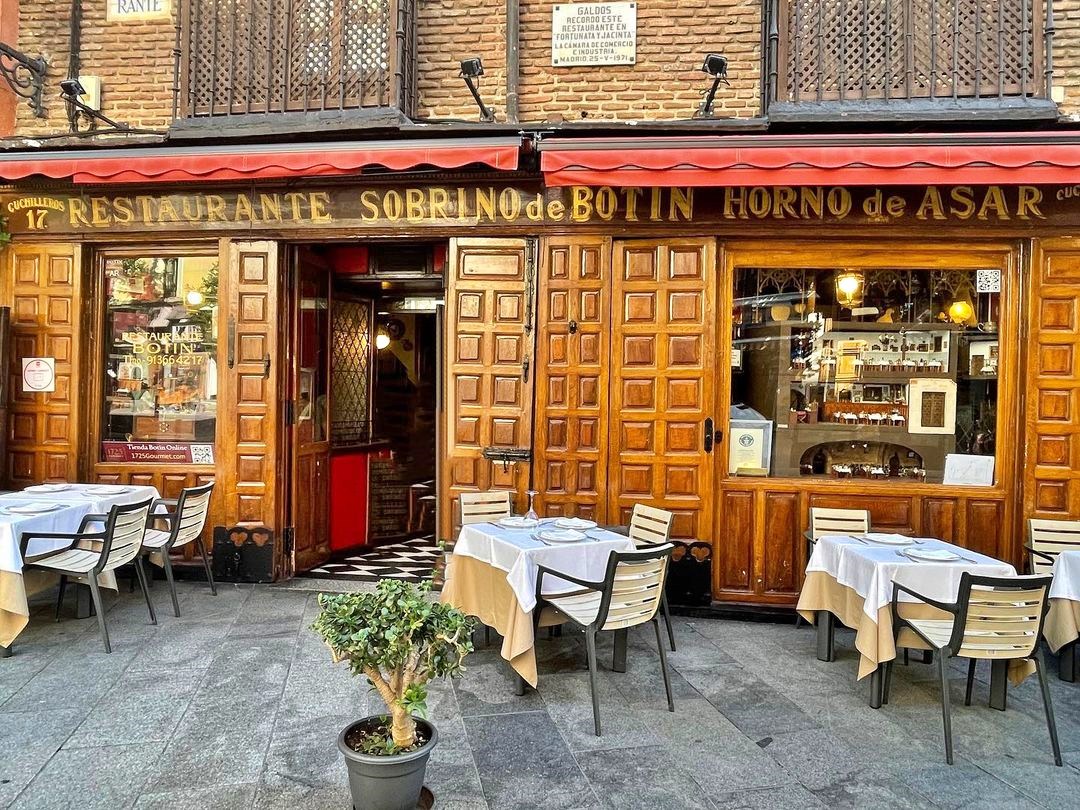 The restaurant has been continually open for more than 200 years and was even mentioned by Ernest Hemingway in his book, The Sun Also Rises. Moreover, authors such as Benito Pérez Galdós, Graham Greene and María Dueñas and more used the restaurant as a backdrop for their novels. Rumors also say that the famous artist, Francisco de Goya, once worked at the restaurant as a young man.

Throughout, Sobrino de Botin has served traditional Spanish cuisine. In fact, it is famed for its whole suckling pig and lamb roasted in the true Castilian style. The restaurant is located at Calle Cuchilleros, 13 and the closest metro stop is Plaza Mayor.

Visit these and more fascinating locations in Madrid on your next Spanish vacation.

Freelance writer and travel writer who has lived in Malawi, Zimbabwe and South Africa, now living happily on the Costa del Sol in southern Spain.