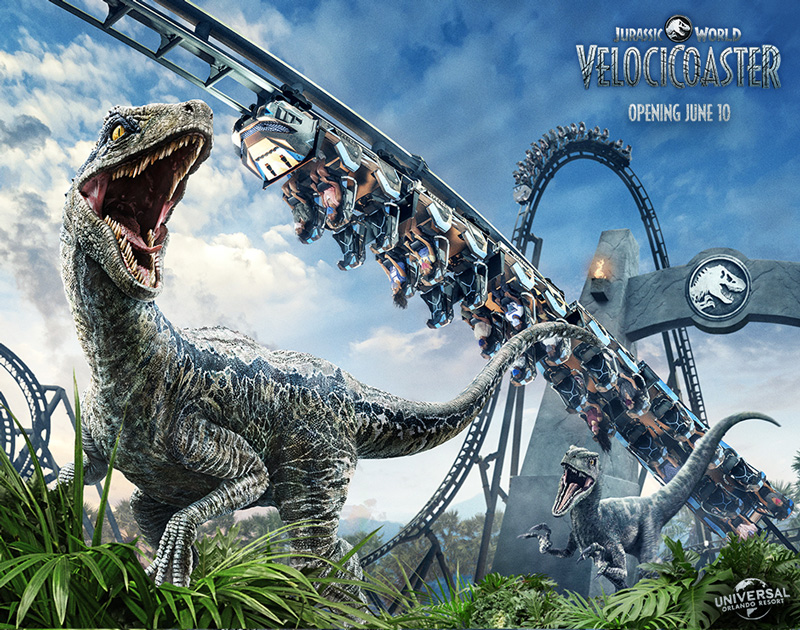 Universal Studios Orlando posted a YouTube video teaser of the ride this week, which showed both POV ride footage and dramatic unveilings of the rollercoaster’s cars, which appear to be way more high-tech and clean than the beat-up vehicles shown in the film series.

The preview clip describes it as, “Step into Jurassic Park and stand in awe and wonder at a land transformed by science after 65 million years. But don’t be deceived by the island’s beauty because danger lurks behind every corner. Only here can you live the adventure of coming face to face with giant creatures of the Earth’s past, encounter raptors roaming every day, or take a daring raft expedition through jungles teeming with dinosaurs. For those brave enough to visit the raptor paddock, you may be able to carefully approach one of these deadly predators. Then feel the rush of the hunt as you race through the jungle alongside raptors on the Jurassic World VelociCoaster, a new species of roller coaster coming Summer 2022.”

When passengers get on the ride, they can expect a high-speed adventure through a velociraptor paddock, which features the film’s four raptors: Blue, Charlie, Delta and Echo. The ride will have two different launches and reach speeds of up to 70 m.p.h. in 2.4 seconds. It will also include a 360-degree barrel roll and a first-of-its kind zero-gravity inverted stall. That sounds pretty intense, doesn’t it?

If that weren’t enough, this dino-coaster will have a top hat which will send guests 155 feet into the air before they make an 80-degree plunge.

Be sure to check out our vlog The Go To Family.

[…] if you are looking to book your first trip back to Disneyland. Disneyland has announced that Avengers Camp – the new land based on the Marvel franchise – is set to open at Disney’s California […]

[…] an online US travel company, has introduced their new app which makes it easier to stay up to date with the never-ending rules. […]

The Tokyo 2020 Olympic Clock is Ticking Down As Japan’s Covid Cases Keep Rising - When Will Tourism Resume? - The Go To Family

Covid-19: British Transport Secretary Says You Can Start Thinking About Your Foreign Travel Plans - The Go To Family

[…] to British Transport Secretary Grant Shapps, travelers in England who have been itching to book their foreign holidays can start thinking about […]