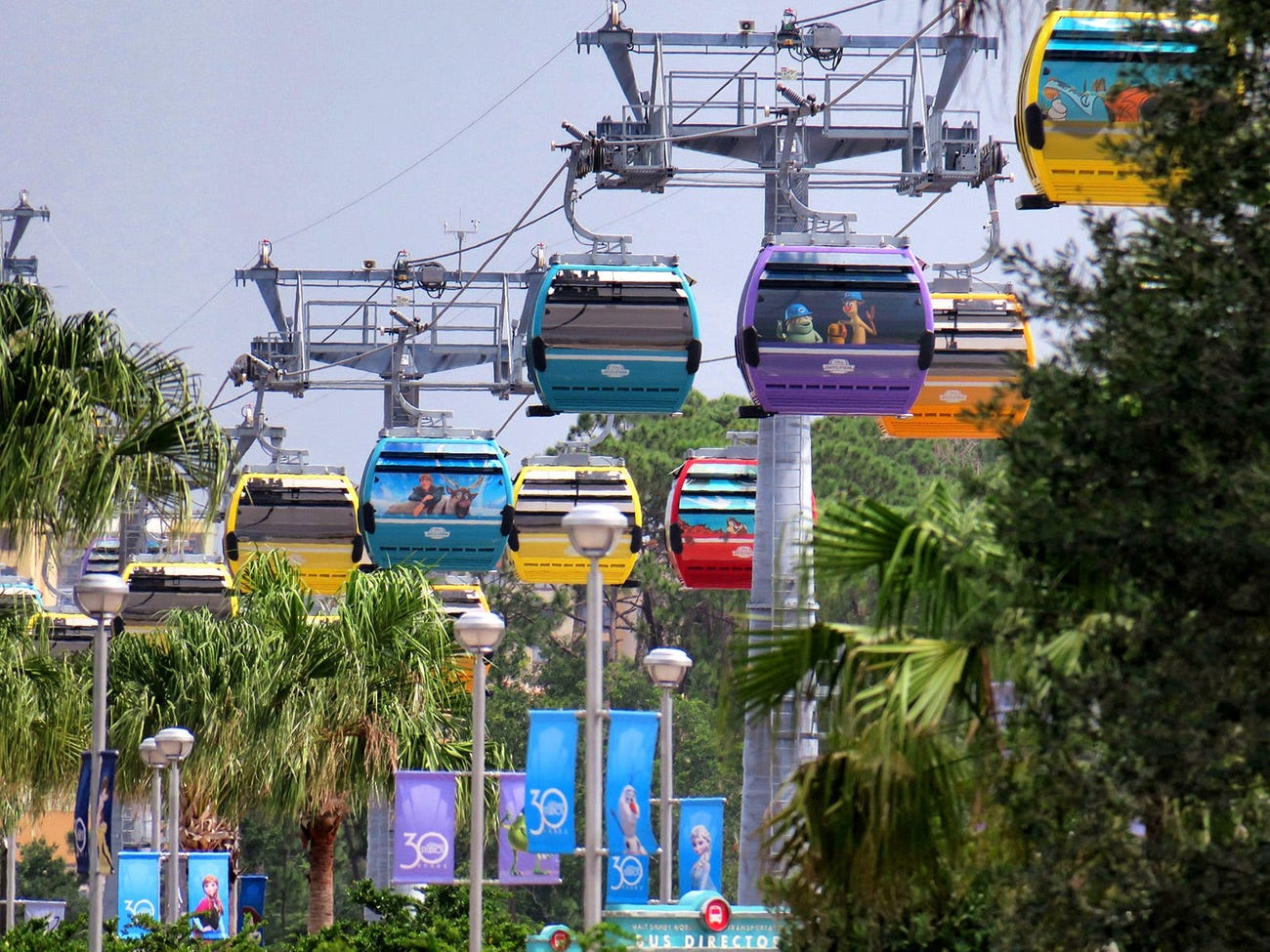 Where’s Toodles when you need him? There’s a new report that says two gondolas at Walt Disney World’s Skyliner system collided this week. Video of the aftermath made its way on social media and shows one of the gondolas tilted to the side. Here’s what you need to know. 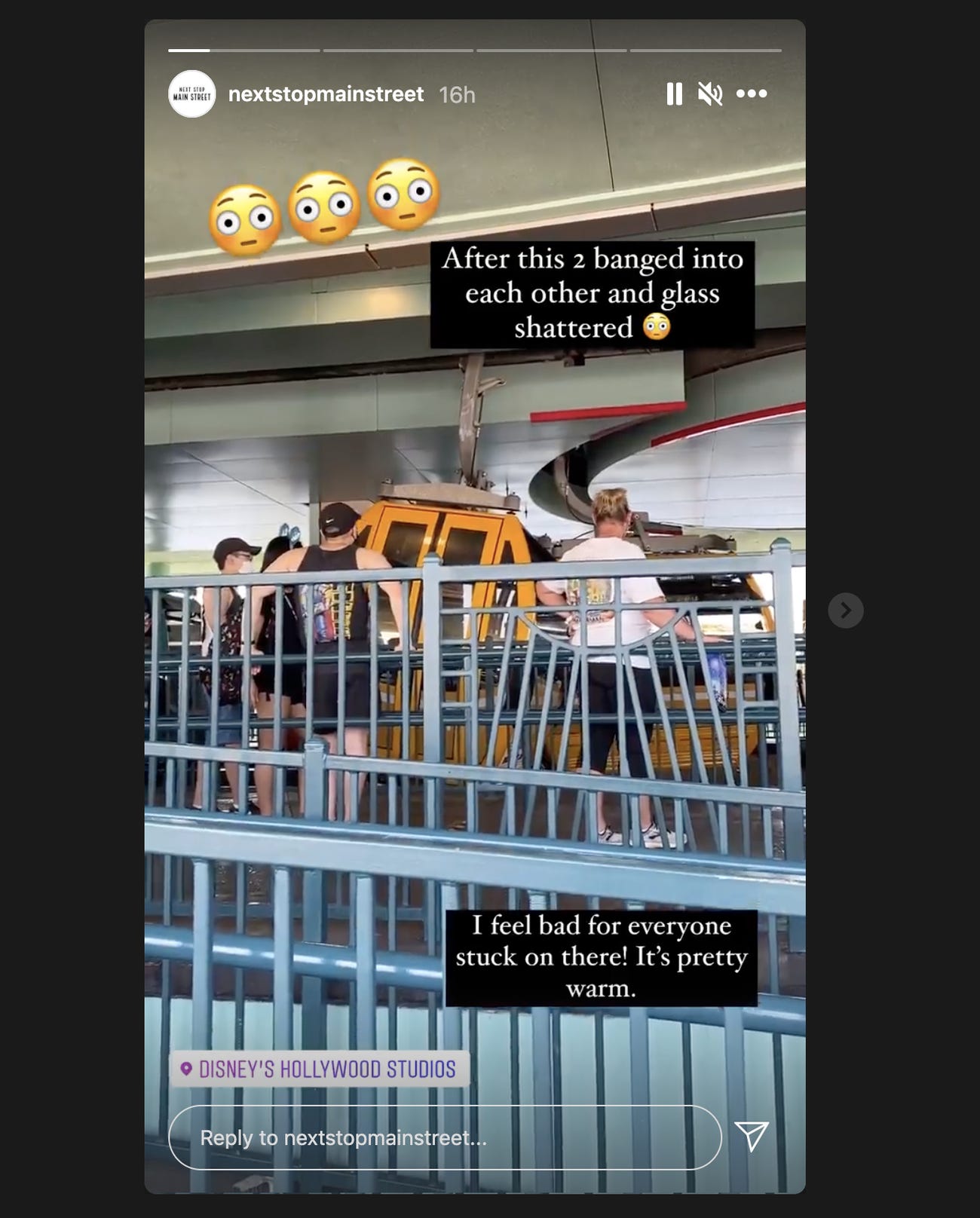 According to reports, Disney said the gondolas crashed into each other after the passengers got out. Thankfully, no one was hurt. The incident happened at the Hollywood Studios Skyliner station Thursday night. One guest told local news stations that t appeared one of the cabins got caught on something and that she could hear glass breaking.

Luckily, Disney officials say that nobody was in the cabins at the time and that no one was injured. The ride did resume operations a short time later.

As many guests know by now, Disney Skyliner is a popular gondola lift system at Walt Disney World that opened back in September of 2019. There are five stations located at resorts and theme parks all around Walt Disney World. Each gondola cabin can hold up to 10 guests, or up to 6 if there is a wheelchair or stroller while guests sit on twin, inward-facing, wooden benches. It was designed to carry visitors from hotels to theme parks about three stories above the ground.

Unfortunately, this isn’t the first time that the Skyliner has malfunctioned. Back in 2019 and shortly after it opened, dozens of guests were left stranded on the ride for hours. Jennifer Mendoza and her 8-year-old daughter, Alex, were among those stuck for more than three hours when the Disney skyliner cable cars, called gondolas, got stuck.

Local firefighters were on the scene at the time. Orange County Fire Rescue officials told reporters, “We did respond to their request for mutual aid and were in position last night to assist when the Skyliner went back up and running. We did not transport or evacuate anyone.”

So far reps for Walt Disney World have made no further comments about the situation.

Dreaming Up! Parade is Returning to Tokyo Disneyland. Will US Disney Parks Resume Parades? - The Go To Family

[…] fan-favorite day time Disney Parade is sorely missed by visitors. Now, as it finally returns to one park, Disney-goers are keeping […]

[…] Hard Rock Hotels all-inclusive packages are always chock full of the value guests appreciate when travelling to Mexico or the Dominican Republic. Now the value has exploded for families as 5 different Hard Rock resorts in Mexico are offering a kids-stay-free promotion, which will last all the way through to December 2022! […]

Will Out of State Guests Be Able to Visit Universal Studios Hollywood this Summer? Company Releases Statement - The Go To Family

[…] possible. There’s a new report that says Universal Studios Hollywood, located right outside of Los Angeles, California, has released a statement on the theme park’s summer plans for out-of-state guests. […]

U.S. Airline JetBlue Set to Shake Things Up By Expanding Into Canada - The Go To Family

What Makes The Disney Cruise Line's Wish so Enchanting? - The Go To Family

[…] On April 29, Disney is inviting guests into see how parts of the newest member of the Disney Cruise Line fleet will look. But there’s no need to wait as we can give you a glimpse of The Grand Hall right […]