Details of Disney Cruise Line’s fifth ship, The Disney Wish have been trickling in since April. Now May has arrived with more dazzling details to share!

The Disney Wish will set sail in the summer of 2022 with bookings available as of May 17 for Castaway Club member  and May 27 for everyone else.

All the New Details!

Currently the hull has been laid at the the Meyer Werft shipyard in Germany and we know Captain Minnie will adorn the bow and Rapunzel the stern. Girl power!

With the magic of Disney Imagineers, the incredibly enchanting Grand Hall–the atrium of The Wish was next to be unveiled showing Cinderella’s bronze statue gazing upon a grand staircase, columns that light up with pixie dust and an ornate wishing star chandelier

Now Disney is eagerly showing off more details of the vessel that is described as its own ‘Castle on the Sea’.

The Walt Disney Imagineering team have promised there will be a little something for everyone and the theming, while all fitting under the umbrella of ‘enchantment’, casts a wide net. Marvel, Frozen, The Little Mermaid, Star Wars, Toys Story, the list goes on. There are also spaces dedicated to adults, kids and families. 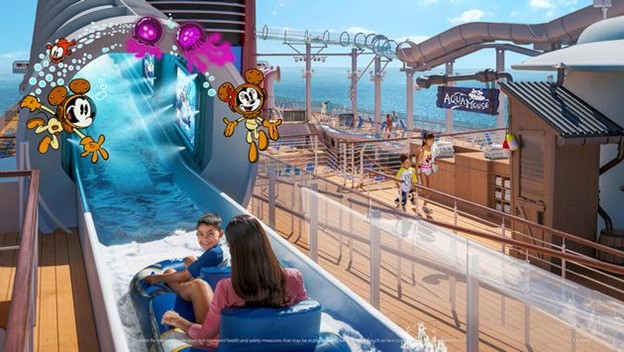 In a first of its kind at sea, The AquaMouse is a fully fledge Disney water  attraction, the likes of what you might see at the theme parks! Themed with “old school” Mickey Mouse short films like 1928’s Steamboat Willie, riders will travel via inflatable rafts along 760 feet of audio and visual immersion. Don’t expect a lazy river type ride, the AquaMouse promises to be fast and wet as guests zip through the winding tubes suspended high above the upper decks! 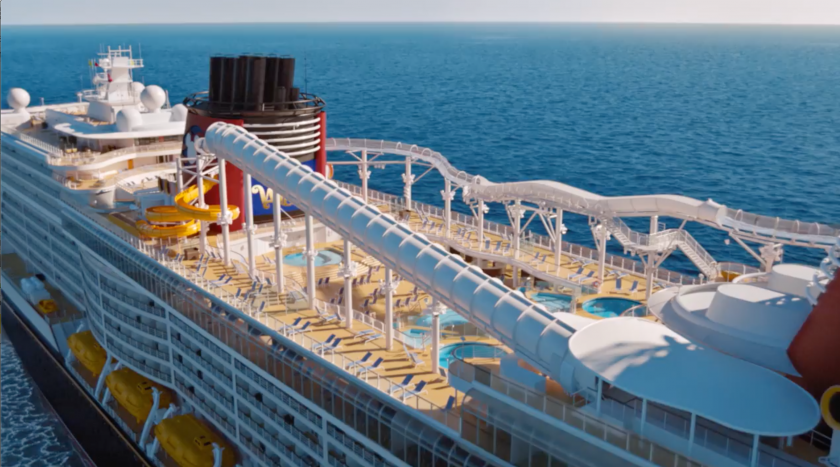 Below the AquaMouse, the approximately 4000 guests will enjoy their sunny sea days in three themed districts, Mickey and Friends for families, Quiet Cove, a tucked away peaceful refuge for adults (only) with infinity pool overlooking the ocean, bar and café, plus a Toy Story themed district for the littlest kids. The young ones will delight in the Toy Story water wonderland including a splash zone, wading pool, family waterslide and smoothie bar.

Four more pools will be staggered along the three districts across tiered sun decks surrounded by the quick service restaurants, bars and all important lounge chairs cruisers have come to expect. 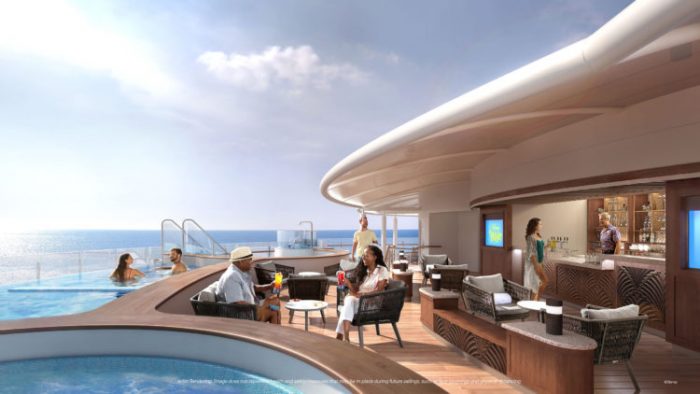 When it comes to dining, no one has the Disney Wish beat. Three family restaurants will offer three different immersive experiences for guests to rotate through. 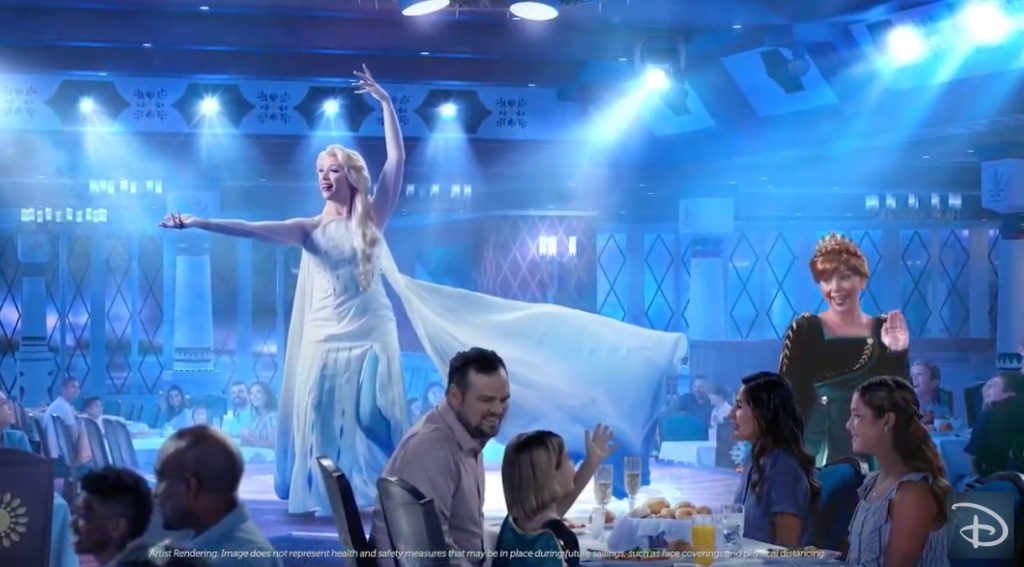 Arendelle: A Frozen Dining Adventure is touted to be a theatrical dining experience with Nordic influenced cuisine, that brings Arendelle to life. Of course Arendelle’s most famous citizens Elsa, Anna, Kristoff and Olaf will be there to entertain.

In yet another the first of it’s kind, Worlds of Marvel is a “cinematic dining adventure”. Guests will play an interactive role the Avengers mission unfolding around them which has been hyped as action packed (sounds exhausting)! The menu is said to be inspired by the homes of Marvel’s heroes like Black Panther’s Wakanda, Wanda and Pietro Maximoff’s Sokovia and Spiderman’s New York City. 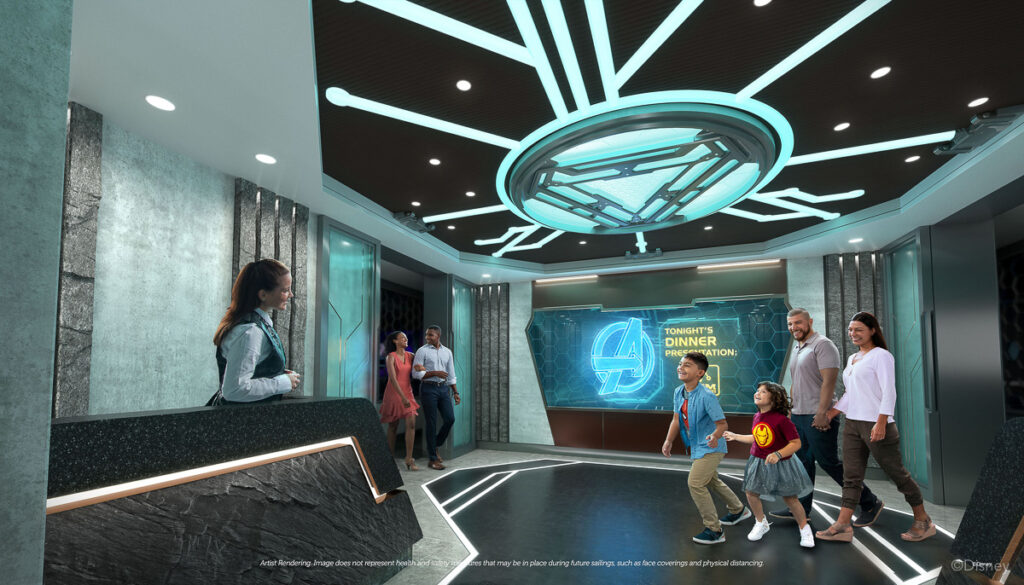 The third family restaurant is 1923, which happens to be the year The Walt Disney Company was founded. The restaurant celebrates Walt Disney’s legacy while paying homage to the golden age of animation.

Two adults-only restaurants will also be offered, the beloved Palo Steakhouse and the new Enchanté, but the Star Wars fans in the over 21 set will be clamoring to The Star Wars: Hyperspace Lounge.

Taking a leaf from Walt Disney World’s upcoming Galactic Starcruiser Hotel, the Hyperspace Lounge will be truly immersive, allowing guests to watch the galaxy go by through the windows, keep an eye on the Empire’s approaching Dreadnaughts and be on the look out for bounty hunters like Greedo…they love this type of place. 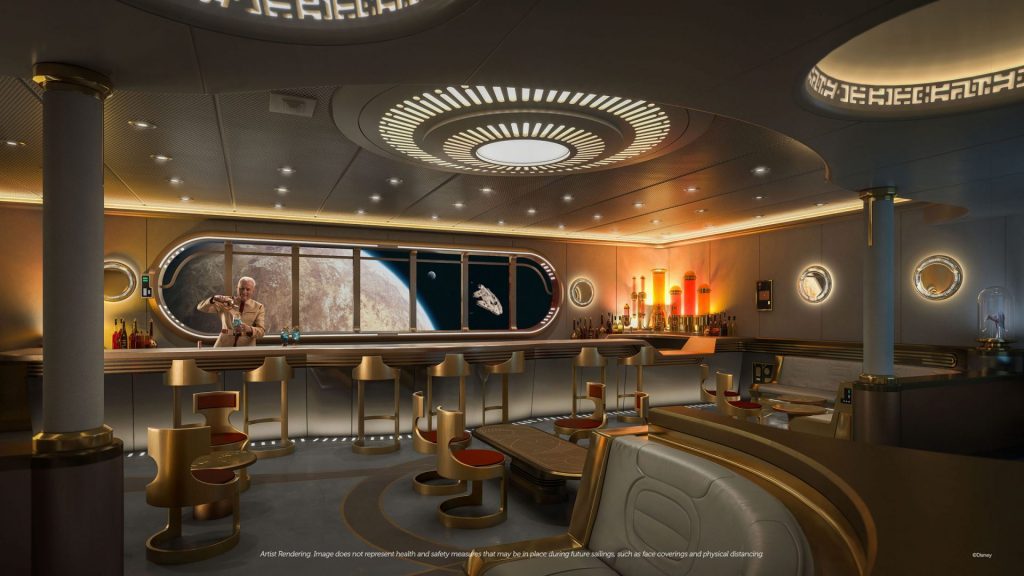 While mom and dad share a drink with the rebel alliances, the kids can take the new secret slide from the Grand Hall directly to the Oceaneers Club and Lab! Both playrooms for kids aged 3-12 have received a total overhaul and offer areas for the Marvel Superhero Academy, Fairytale Hall, Rapunzel’s Art Studio, Disney Imagineering Lab and so much more!

Kids will even be able to create a roller coaster  along the lines of Big Thunder Mountain Railroad, Space Mountain, or Matterhorn Bobsleds in the Ride Studio before climbing aboard a capsule to virtually ride it! Whoa! 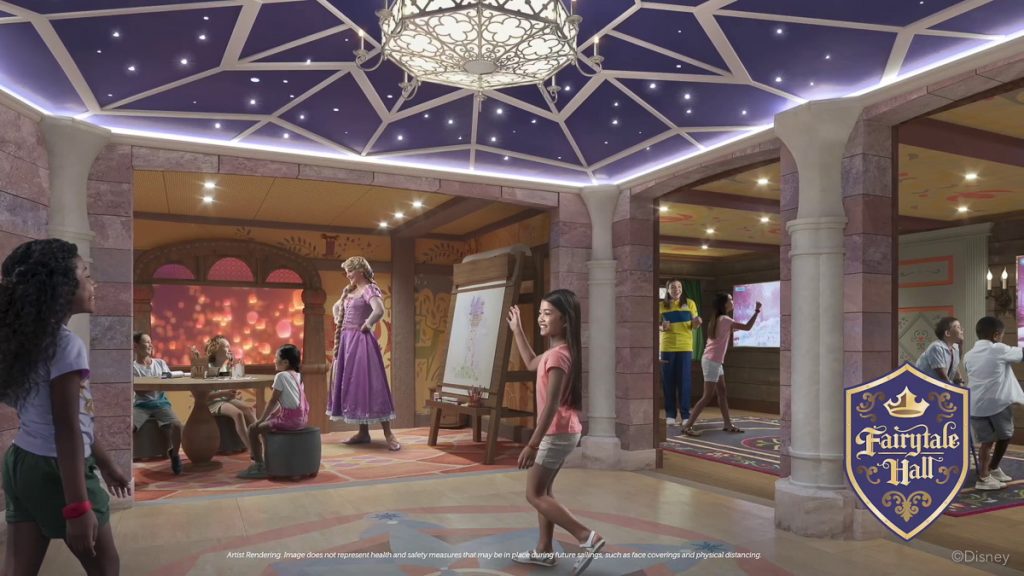 The It’s a Small World Nursery will be available for the little ones and the teens will have their own space away from it all. Located on deck 5, the Edge’s secret entrance will be hidden behind a framed piece of art. Once inside 11- 14 year olds  will hangout in a chic New York City loft and enjoy youth counselor run activities.

14-17 year olds will be welcomed into Vibe, this time a Parisian loft. With floor-to-ceiling windows overlooking the ocean, the Vibe offers games, activities, movies and Insta-worthy selfie backdrops!

While the Wish’s Broadway style shows that take place in the Walt Disney Theatre are being kept under wraps, we do know Aladdin will get his moment in the spotlight! 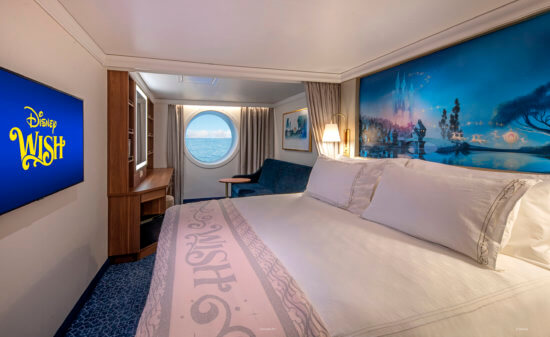 Finally, of the 1,254 staterooms 70% will have a verandahs while over 900 offer inter-connecting doors for large groups sailing together. The big draw will be the select staterooms located above the bridge, wowing guests with floor-to-ceiling window views!

Yes, you will see what the captain sees!

Four royal suites, two with two stories will also be available on board The Wish.

So what do you think? Are you counting down the days until you can book your family on a three or four day cruise from Port Canaveral to Nassau and Castaway Cay in the Bahamas?

Us too, we’ll see you on the high seas, but before then watch this enticing video here:

and keep an eye on this spot for even more enchanting details about the Castle on the Sea, The Disney Wish!

[…] of Viking’s eight Ocean cruise ships, Viking Venus and Viking Sea will be calling Valletta, the capital of Malta home starting this […]

Orange County is Getting Close to Lifting the Outdoor Mask Mandate. Will Walt Disney World Do the Same? - The Go To Family

[…] are aware of the state of Florida’s plans to modify COVID-19 guidelines. We will evaluate this latest guidance and maintain our current […]